A conventional cablebolt is a flexible tendon consisting of a number of steel wires, wound into strand, which is grouted into a borehole. Cablebolts are normally installed in regularly spaced boreholes to provide reinforcement and support for the walls, roof and floor of underground or surface openings. 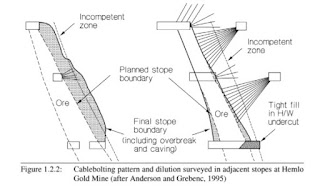 Cablebolting is a very versatile form of support, since the cable strands can bend around fairly tight radii, making installation of long bolts from confined working places possible, and because they can be fabricated using a number of different configurations of the steel wires providing a variety of performance characteristics. It is not difficult to place more than one cablebolt strand in a single borehole, to increase tensile capacity, if the borehole diameter is large enough. In addition, face restraint can be attached in the form of plates, straps and mesh. Cablebolts can be used in combination with other support systems such as shotcrete, mechanical bolts or grouted rebar.

The capacity of the steel cablebolt element is transferred to the rockmass through grout. Grout used in cablebolting applications is usually composed of Portland cement and water. At some mine sites additives are added to the mix to improve the pumping characteristics of the grout. Other grouts, including resin and shotcrete have been investigated for certain cablebolting applications. As well, alternative materials such as fibreglass have been developed to replace the steel itself. This handbook will focus primarily on cablebolts developed from the conventional seven-wire steel strand and on cement grouts.

In any mining or construction project, safety is of paramount importance. Different support methods such as mechanical rockbolts and screen, shotcrete or grouted rebar are normally employed in smaller span mining tunnels or drifts to protect workers from smaller blocks and loose rock which may fall from the roof or sidewall. For larger spans in major intersections, large underground chambers or in active mining stopes, cablebolts become an attractive support system due to the increased load capacity and the potential for increased bolt length. Larger spans in general mean greater potential for large free blocks or broken rock falls.

This increased demand requires an increase in support system capacity which can be effectively provided by cablebolts to ensure adequate safety. It should be noted that in areas where areal restraint systems such as screen are used to protect miners from smaller pieces of loose rock and to prevent surface unravelling of poor rockmasses, cables can be used to supplement but not to replace this form of restraint. This form of demand cannot be accommodated by cablebolts alone. Chapter 2 discusses demand-capacity relationships.

Cablebolts can reach far into the rockmass and reinforce large volumes of rock to prevent separation along planes of weakness such as joints. By maintaining a continuum nature within the rockmass, the cablebolts help to mobilize the inherent strength of the rockmass, thereby improving overall stability. In addition, by supporting blocks of rock at the excavation surface, the remaining rockmass is prevented from loosening and weakening. Cablebolts thus restrict the dangerous and costly effects of progressive instability and failure.

Cablebolts can be installed remotely in long boreholes to reach the planned stope boundary and provide pre-reinforcement to the otherwise inaccessible walls and backs created by today’s bulk mining methods. Cables are one of the only options for support of inaccessible rock faces for stability and dilution control.

Dilution control can have a very direct and large influence on the cost of a stope. The cost of dilution is many-fold: waste rock with little or no economic value is mucked, trammed, crushed, skipped, milled and impounded in a tailings disposal area, all at great cost. In addition, the mill works at effectively only partial capacity, despite producing at the maximum possible milling rate. The unscheduled delays required to deal with oversize muck, mucking waste rock and with consequent changes to the mining schedule are also costly.

Other examples illustrating the economic importance of rock dilution are given throughout the mining literature including Bawden (1993), Elbrond (1994), Pakalnis et al. (1995), Planeta et al. (1990), Planeta and Szymanski (1995), Stillborg (1986), and others. Many mining handbooks include calculations for tracking the progress of waste rock dilution through the mining and milling processes to determine its overall economic impact. A detailed treatment of mine economics, however, is beyond the scope of this handbook.

All modern mining will have some minimal dilution limit resulting from the smoothing of stope outlines to facilitate blasting or due to other sources of planned dilution. In many situations, particularly where there is a distinct ore/waste contact, unplanned dilution due to sloughing waste rock can quickly render the stope uneconomic. It is this unplanned dilution component which can be tackled through improved stope design and through the use of cablebolt support.

Many mines have found cablebolts to be effective in reducing or eliminating this sloughing and thereby reducing dilution. Alternatively, the use of cablebolts can facilitate the safe extraction of larger stopes normally resulting in increased productivity. Figure 1.2.3 shows theoretical dilution values as a function of span and sloughing depth for an unsupported stope of simplified geometry.

You are about to be redirected to another page. We are not responisible for the content of that page or the consequences it may have on you.